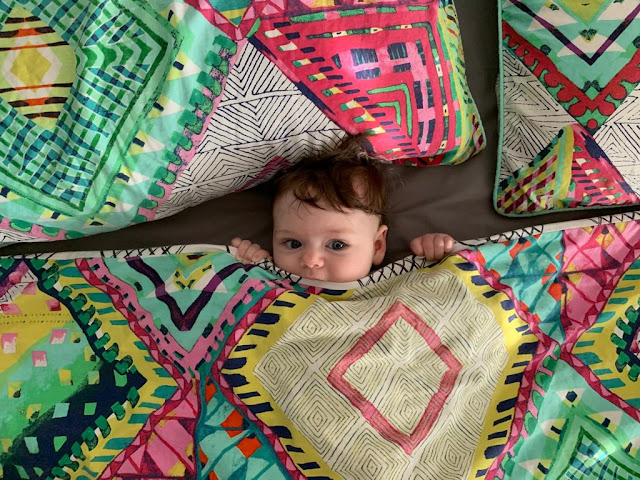 Once upon a time, a man somewhere in the world had insomnia. He slept at his usual bed time, 10pm, then woke up at 1am, and then every hour until the morning, when he gave up at 6am. He woke up for his day and he was a wreck. He was also a joker. Once he got to his job, people looked at his face and asked "what's this face?" and he responded "I slept like a baby!". Most of his colleagues, who had no children, thought he meant he slept well, and kept using that funny expression whenever they had a great night of sleep. What a troll that man.

Babies are born with one reflex. They know how to suck a nipple. That's great for evolutionary reasons, as it is how they get fed, and then how they learn to relax. At the start of Lucia's life, I remember trying to keep her awake while she was nursing to ensure she got enough food. I made a joke to our midwife, Eva: "So this is how my life is going to be? Now I fight so she doesn't sleep and then I fight so she does?". Eva laughed and said yes.

Breaking news: babies are not born with the ability to self-soothe, which is necessary to fall asleep on their own.

At the newborn stage, baby sleep has only two phases: deep sleep and rapid eye movement (aka REM). This means that your little one will seem like a good sleeper: they can even sleep with noise and will sleep mostly anywhere! That will last until about 4 months old, when there's a sleep development leap (known as the 4 month sleep regression) and then your baby will seem to unlearn to sleep. You can read all the nerdy bits about baby sleep here.

The 4 months sleep regression is where an important skill will start to play a larger role in the sleep of your baby, and of your family too: falling asleep. Babies who do not know how to follow asleep will ask their moms for help throughout the night when they are transitioning from one sleep cycle to the next.

We were warned by friends about the important of sleep for babies, but we didn't think it would consume so much of our thinking until Lucia's sleep started to get worse. At first she would give me a couple of 2 hours+ stretches of sleep every night, but then that became one, then it became rarely. Trying to function as an adult on a sequence of 30 minutes power naps is tough and you brain goes down very weird paths over night when you're so sleep deprived.

At the start Lucia slept on me (literally), then by my side, but then she moved closer, then Mark moved back into bed, then Lucia started to kick me a lot over night, then I moved with Lucia to her bedroom and got a bit of distance between us in a floor bed, then she started moving towards me over night and nurse for hours non stop until she started hurting me, then she would start waking up in the middle of the night and stay awake for up to 3 hours. If we tried to put her down to sleep she would cry a lot.

Besides the drag in the night itself, our evenings were becoming worse: Lucia would start complaining for being tired around 7pm. We'd go to the bedroom with her but she would not sleep until 9 or 10pm, and then I had to run out of the bedroom to shower in 3 minutes and get back in bed with her before she woke up. I wasn't having fun. The best nights were the ones Mark and I could have dinner together at the dining table, instead of me eating an almost cold meal in a dark bedroom.

During the days things were different, and somewhat more stable, even if not ideal. Lucia would either nurse to sleep and stay by my side or in my arms, or one of us would put her in a baby carrier and she would take her nap. We wanted to remove as many variables keeping her from being a good night sleeper, and not having enough day sleep, as contradictory as it might sound to an adult, is one of the reasons why babies sleep badly at night too.

Lucia's sleep did not improve on her own, so I started reading about every sleep training method that exists. In particular I was interested in gentle methods of sleep training, which do not include leaving your baby to cry on their own for hours in the dark. Mark and I started chatting about when to start, and agreed that "cry it out" (CIO) wasn't for us.

We agreed on a date, which would start on a Friday evening to ensure we both were at home. But then on Sunday we had another of the episodes. Lucia started fussing at 7pm. It was already past 8pm and she wasn't asleep. I was feeling like a zombie because of the past nights without sleeping -- she had woken up in the middle of the night for 2 or 3 hours in the past 4 days. I looked at Mark and said: we are starting today.

I confess it was tough, because she wasn't happy at the beginning. We would go back in the room frequently and make sure she was alright. We kept watching the baby monitor non stop. We didn't sleep much that first night, mostly worried about her sleeping away from us. She woke up twice in the first night, once in the second and third and did not wake up from the fourth night. Whenever she called me in during the night, I went in, fed her, held her, changed her nappy and put her back in her bed. Until today I would do the same if she calls me in. I know that if she is hungry, she will call me in. She knows I will go to her if she calls.

Within a couple of days we had a pretty nice bedtime routine: bath, bottle with daddy, sleeping bag, then cuddle/dance with mommy in the kitchen, then dance/cuddle with daddy in the bedroom, then crib. She falls asleep usually within a few minutes.

There was a last challenge though. It turns out that night sleep and day sleep are not the same thing and are controlled by different parts of the brain. We decided to wait until she was really good at falling asleep at night before we moved her into the crib for naps, because we didn't want her to cry. Mark continued to hold her in the carrier for naps (in a dark room, standing most of the time). Fortunately the wait paid off. She didn't cry when we started to put her in bed 3 weeks after we started putting her down for the night sleep. She smiles at us a lot of the time when we put her in bed.

For the day, we have a shorter routine with sleeping bag, one song cuddle/dance, and then down in the crib. She also falls asleep within minutes usually.

When she is up, its full on Lucia time, and I am happy we get to spend so much time with her. She's such a happy kid and came to our lives to fill our day with the simplest of life's discoveries every day.

I have to confess that I didn't have much of an idea that the most challenging first job I would have as a parent was to teach a baby to sleep. Sleep like a baby, they say...suuuuure... 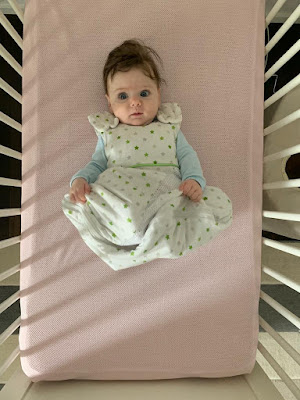